A time walking through Pre-war Houses and Tiong Bahru Market

Tiong Bahru Heritage Trail traces the history of Tiong Bahru as it transforms from a cemetery to one of the most sought-after residential addresses. Follow by the trail to discover the beginnings of the estate when early settlers arrived after the General Hospital was relocated to Sepoy Lines. When the Singapore Improvement Trust (SIT) took to develop the area for its third public housing program. Uncover the history behind Tiong Bahru's unique architecture, its famous food stalls and well-known personalities. The trail will also reflect to the old Coroner's Court and the now-demolished Outram Prison once located at the foot of Pearl's Hill, as well as other historical sites such as Tan Tock Seng's grave. 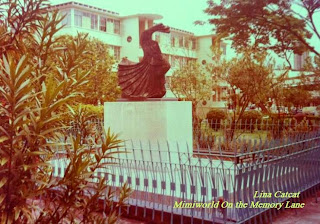 Dancing Girl Sculpture taken in early 1980
Take a look at Dancing Girl sculpture at Seng Poh garden taken in early1980 when I was still in school at Tiong Bahru Secondary School located nearby and now no longer there been demolished, which was the original (above picture) before it was built later that year 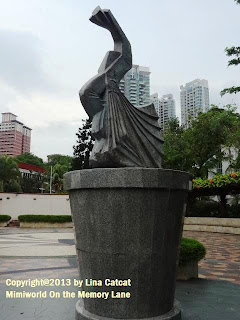 Dancing Girl Sculpture taken in 2013
It's been changed since 1970 and 2013 (now and then), a sculpure erected by the National Day Celebration Working Committee of Tiong Bahru Constituency, was unveiled by the Minister for Defence, Mr Lim Kim San on 1st Aug 1970. Today, Seng Poh garden is located at the an open grassy area which residents used for their morning exercise and gatherings. 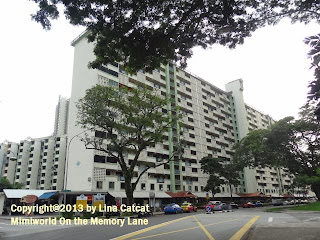 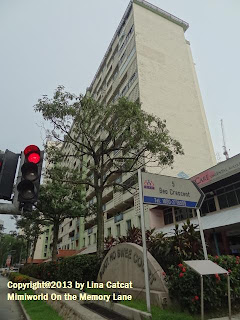 Side view of Blk 22 Havelock road
Havelock road is the street name and the region of Tiong Bahru. My parent-in-law was once lived at Blk 22 Havelock road (3-room room flat) for more than 30 years before they shifted from Craig road shophousese opposite Neil road in 1965. By the time, Tiong Bahru Plaza was not yet built until it completed in 1994. At Havelock road was once kampong villages along Bukit Ho Swee before the 'Big' fire in 1961. I stayed with in-law for 5 years before shifted to Holland Village in 1998 and the old flat where my in-laws (early resident) stayed and eventually sold to the second buyer (2nd resident).  That times, my in-law only paid one-time S$5000 for the whole unit and lived for 33 years, at that time they were poor old folks living in that block during old times that were surrounding by villages. 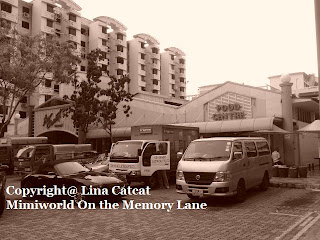 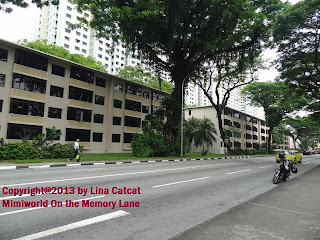 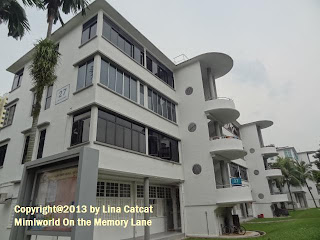 Blk 27 Lim Liak Street
These Post-war flats were designed by Lincoln Page and Robert F.N. Kan, built in between 1948 and 1954 after a few year in WWII ended in 1945 to embarked of the public housing projects in Tiong Bahru in order to help tackle the shortage of the housing estates. All the Post-war flats and shophouses that was built with spiral staircases at the rear of the apartment blocks and the back of the shophouses too. 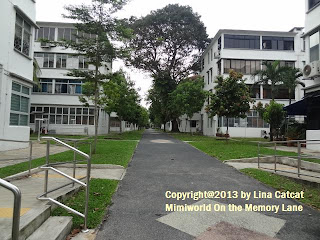 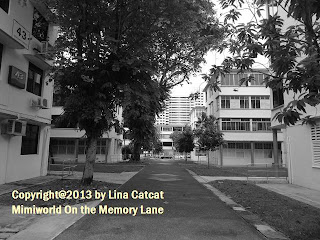 Rows of Blocks of flats are Moh Guan Terrace
The street of Lim Liak Street (1941) was named after Lim Liak (alias Lim Leack) who came to Malaya from China in 1825 to work in Tin Mines before moving to Singapore to start various businesses. Lim Liak was the proprietor of Leack, Chin Seng and Co as well as Chop Hiap Chin that dealt with tapioca platntations and shipping and was very well-repected in the Chinese community and died at the age of 71.
Moh Guan Terrace was named after See Moh Guan (1879) who was born in Malacca and was the fourth son of See Hood Kee (1793-1847) who was the nephew-in-law of Tan Tock Seng (1798-1850), was in the pepper and gambier business. In 1879, he assumed chairmanship of the Tiong Bahru Heng San Teng temple, taking over from his father who had passed away that year. In juction of Moh Guan Terrace, you can see the Dancing Girl sculpture at Seng Poh Garden 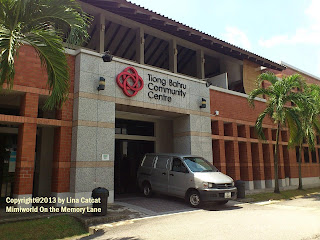 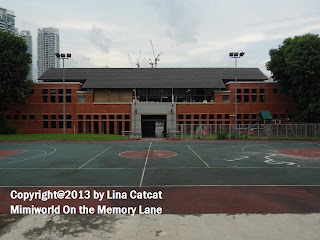 View from the front with basketball court
Normally the Tiong Bahru Community Centre is the earliest community centre during the period from 1951 to 1960 was established at Eu Chin road, at the cost of S$20,000 was opened by Duncan Robertson on July 1951 in front of some hundreds guests and residents. 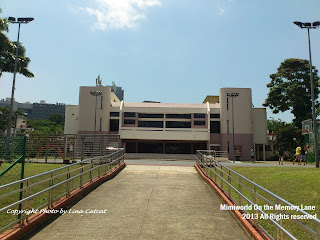 View to the end of the Tiong Bahru CC after the court
The Original of Tiong Bahru CC was in fact converted a 'self-contained' of the Air-raid shelter along the Eu Chin street in 1951 as it is still around today. 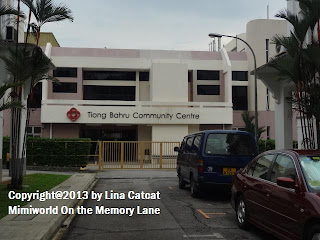 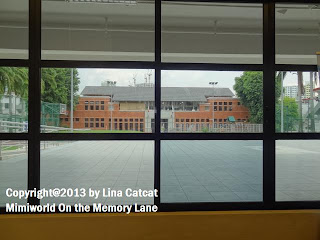 A peek through the window of CC (at the back of the building)
Apart from the Community Centre, I walked outside at the back of the Tiong Bahru CC along the street of Eu Chin road where there is another 'Red' brick of Blk 81 & 82 of Seng Poh street. 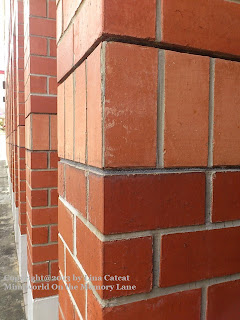 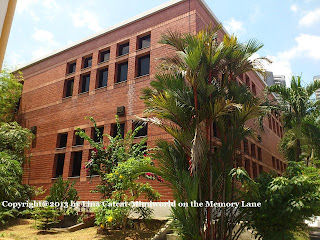 'Red brick" at the rear of Tiong Bahru Community Centre
As you can see red bricks at the corner end of the Tiong Bahru CC that is fully covered overall at the back of the building and the bricks is the use of the building of balconies of these pre-war flats and also the Blk 57, 81 & 82 Seng Poh street. 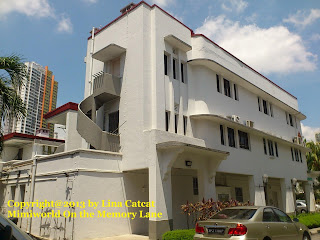 Spiral staircase of the shop of Tiong Bahru estates 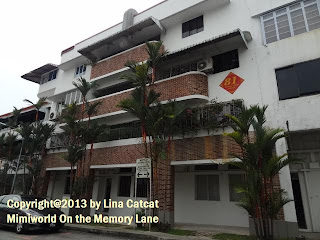 Bricks workd on Balcony of Blk 81 Seng Poh road
From the Blocks 81 and 82 along Tiong Poh Road were known to early residents as ‘aeroplane flats’ because they appeared as it is that from a distance, like the shape of the wings of an airplane. 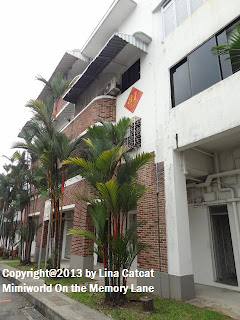 Side View of Blk 81 Seng Poh road
The unique design feature of Tiong Bahru’s flats is the use of red brick work on some of the balconies. These fair-faced (unpainted) facing bricks are laid out in pleasing patterns of darker and lighter bricks (above picture close-up). You can see these at blocks 57, 82 and 76. 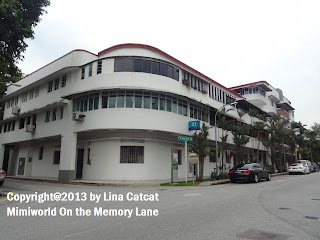 Shape of the wings of Blk 81 Seng Poh road
The featured of Tiong Bahru's window and door frames that were imported all the way from England, from the famous Crittal Manufacturing Company. These windows and frames were glazed in unique green coloured glass that could cut out the tropical glare and heat. 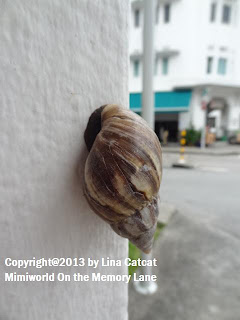 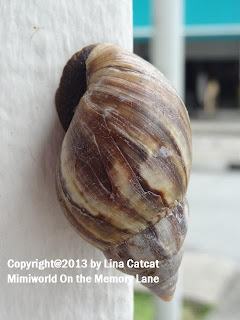 Close-up of a snail
I spotted a 'adult' snail that sitting on top of the wall building just opposite of Tiong Bahru Market  along Lim Liak Street as if it knows my presence, stood still without any movement. Too bad, I wouldn't see its head popped out and it seems scared but luckily there is no birds around and it's safe. 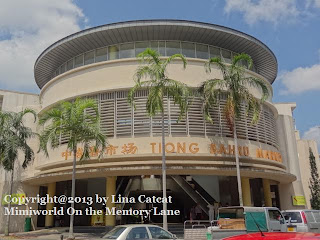 Tiong Bahru Market in 2006
In fact, the newly-opened of Tiong Bahru Market located at 30 Seng Poh road, was formerly known as Seng Poh Market in 1955, under the charge of the National Environment Agency, the first modern market to be built in a housing area. I remember that I used to walk pass by when I was still in Tiong Bahru Secondary school (now no longer exist) at nearby that was once wet market with streets hawkers along the streets.In 1990, I used to call the market - Tiong Bahru Food Market and Hawker Centre before it changed to Tiong Bahru Market. A walking distance from a Tiong Bahru Mrt station is just about 5 to 8 mins, cut through the Lim Liak street of pre-war flats along two bus-stops ahead of it. 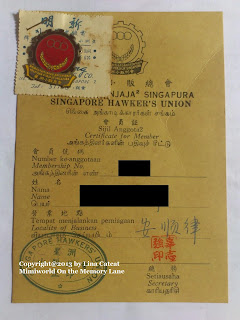 Licenced Hawker issued by Singapore Hawker's Union
In those times, the hawkers were all street-hawkers and well back then, my late mother-in-law was one of them and she was lucky as she was licenced hawker around late in 1955, and those who were under constant threat of being chased off as street-trading was illegal. Tired of their uncertain lifestyle, the hawkers organised themselves and petitioned successfully to the Governor of Singapore, for a market to be built. 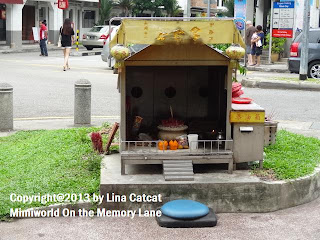 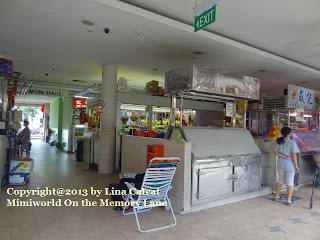 Wet Market
Tiong Bahru Market which has three storey levels of building, the first floor is the market while second upper floor is the food hawker stalls and the 3rd floor is the carpark. 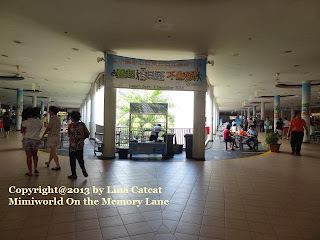 2nd Floor food centre above the market
In the second floor level, just above the market that has a wide range of hawker stalls that divided two sections (see as above) that surrounded the building where there are almost more than 50 food stalls of different variety of food spreading out their traditional style of foods. 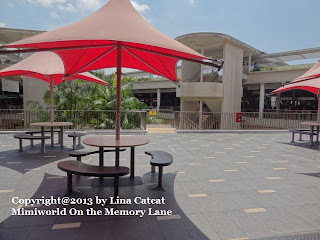 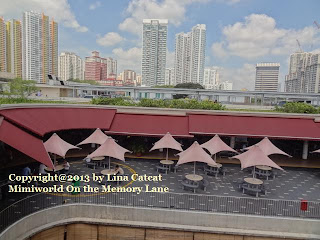