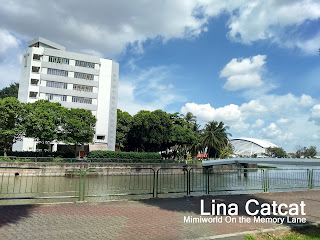 Kallang Rivergreen Building and footbridge
On the hot afternoon, I took a Mrt to Lavender Station. Walking time 6-8mins. Exit station on the ICA side, cut across the open-air carpark and head towards the bridge on Crawford Street where you can see the bus-stop and Kallang River. 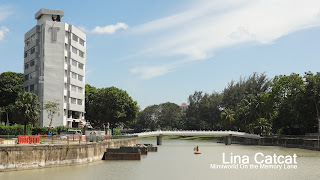 Woman with a Moustache@the rooftop
There is a white 8-storey building (Kallang Rivergreen Building) with a graffiti of a woman with a moustache at the rooftop of the building, walk along the path (the river should be on left side) until I see a white bridge (above centre). 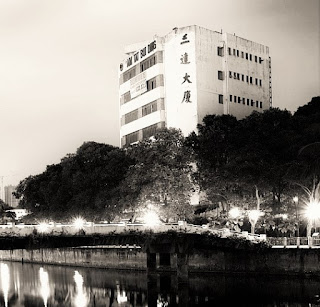 Sam Tat Building in those days
Before that the building was formerly known as "Sam Tat Building" and has been there for a long time. It has been vacant and in a sorry state. Later that year in 2013, the forlorn Sam Tat Building renamed as "Kallang Rivergreen Building".and there are restaurants, pubs and entertainments. 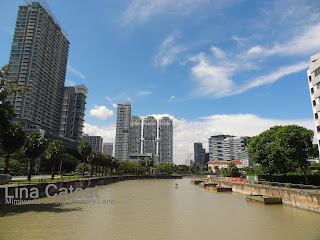 View from a footbridge
Been there a few times in those years, the last time I strolled along the Kallang Riverside Park was in early 2000s. I could remember the Kallang Gas Works was built in early years around 1901, Gasholder No. 3 is the oldest remaining structure of the former Kallang Gasworks. Please note that No Cycling and Motorised vehicles cross the footbridge. Do you know there was once the site of an old Kallang Gasworks across the river in the middle of the photo (4 buildings in the centre)? You can see the photo (credit by Mr Lee) as below. 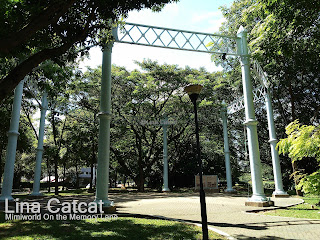 Gas Holder Structure
The plant, equipments and structures in Kallang Gasworks have been dismantled leaving the supporting the pillars and girders of Gasholder No. 3 have been preserved and erected. 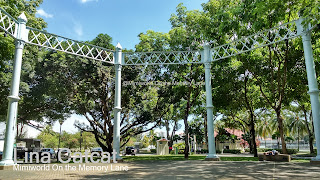 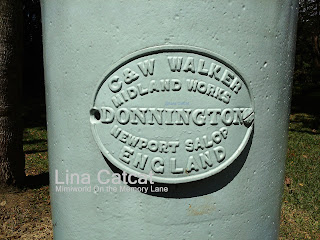 C&W Walker inscribed in it
"Walker's works" (C&W Walker Ltd) iron works produced components of gasometers and ship's engines and manufactured gas. Refurnished the shade of blue that is close to the original, this Gas Holder structure was preserved and installed at Kallang Riverside Park as a tribute to the Kallang Gasworks' contribution to Singapore's economic, is the only remaining located at the carpark of Kampong Bugis.
When you were travelling past by that area, you could smell very strong wisp of gas. In 1966, a clean and more efficient feedstock was introduced. The Kallang Gasworks ceased operations on 23 March 1998. 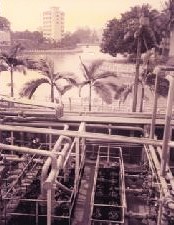 Old Kallang Gasworks seen facing old Nam Tat Building & footbridge
Photo credit by Mr Lee
Over 28 years ago, the 154 year-old Kallang Gasworks was held an "open auction" of its every part and every bit of itself to be sold – from a giant bolts to spiral staircases wrapped around the huge gas-generating cylinders to the metal sheets of the cylinders themselves. Even the office typewriter with the ink-ribbon spool still in place and the desk that refused to disintegrate because it was not made from laminates – everything had to go. With a little help from the auctioneers who conducted the auction from the back of a lorry, the gasworks flattened itself out in no time. In this photo is seen with the Sam Tat Building (background) known as Kallang Rivergreen Building and the same old footbridge still there. 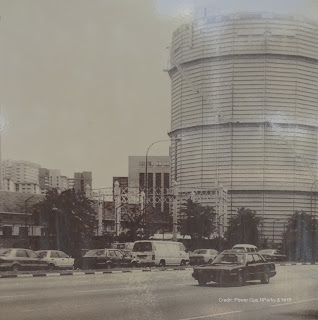 Gas Holder Structure & Gas Tank
Credit: Power Gas
The history of Kallang Gasworks dates back in 1861 when pipe gas was first produced primarily in street lighting, and later for commercial and industries uses. Since it's opening, the gas works was under 24 hr surveillance, guarded by Ghurkhas around the clock. There were rows of shop-houses in this vicinity and Sim Drive market were there too.
When you mention 火城 in the past, most people in the older generation will know you were talking about Kampong Bugis or Kallang Junction. Specifically 火城 referred to Kampong Bugis instead of Kallang Junction. But why named it 火城 (Fire City – Huay Sia in Hokkien )? It’s probably due to the installation of the Gas Work at the Kallang Juction or Kampong Bugis. 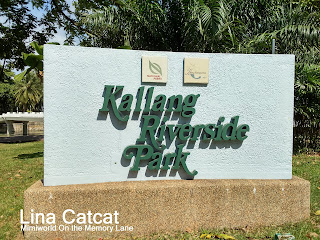 Kallang Riverside Park
The structure of Gas Holder at Kallang Riverside Park was the pillars and girders which supported a gas tank. The tank which was a massive cylindrical drum could move up and down within this structure. Sometimes it would move right to the top of the structure, other times it would remain low, depending on the volume of gas produced and stored in it, I was told. Besides the huge blue gas tank, there were a few these tanks facing away from Kallang Rivergreen Building, by the banks of Rochor river.
In the early years 1980s, Kallang Gas Works was called “huay sia” or “fire city” as flames from the burning of waste gas could be seen from the Gasworks' discharge chimney stack throughout the day. Residents around the area had to tolerate breathing in the pungent toxic gas which was released day in & day out, until two tall chimneys were constructed. 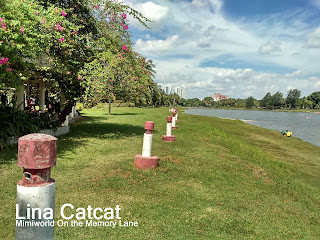 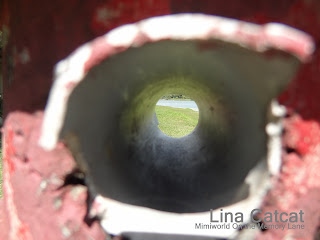 Pink Pillar in the hole
A row of pillars stand along the Kallang river where people go for fishing, Some of them look for crabs and oysters. 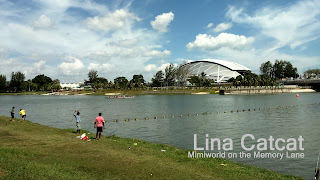 Fishing, dragon boat and stadium (background)
This photo on the far left, there are dragon boats events and the stadium is on the right 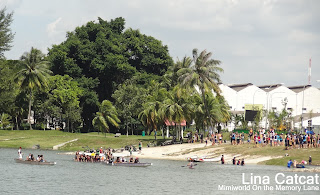 Close-up: Dragon boat and canoeists
Dragon boat teams and canoeists can practise and display their skills in the Kallang River while fitness enthusiasts jog and cycle on the tracks, which come complete with distance markers. 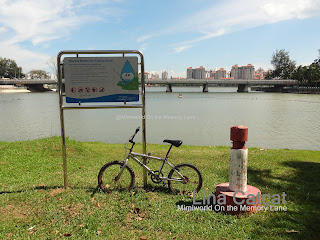 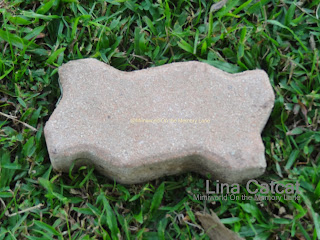 Cement stone
There are some cement white stones lying around the grass near to the river and it looks like a smooth surface stone. 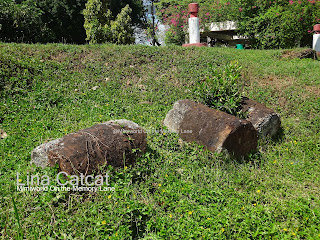 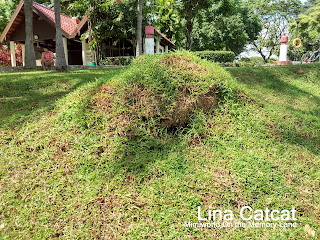 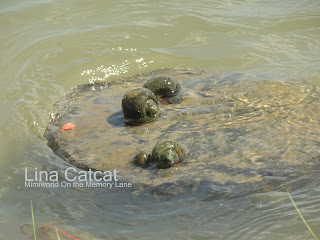 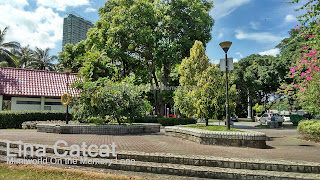 Park garden
Accessible amenities such as vending machines are located outside the toilet. Seating facilities are available within the park area and the shelters. 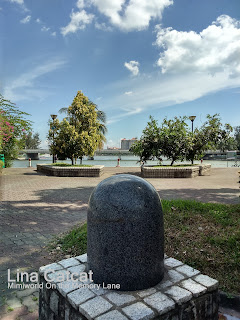 The Kallang Riverside Park now is cleaner compared to the past when those old houses where the old residents were once lived, around at Kampong Bugis. 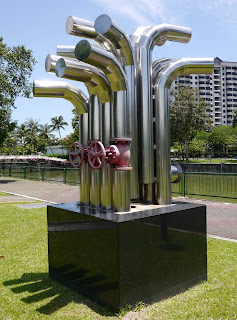 Spirit of Kallang
Spirit of Kallang sculpture by Mr Lim Leong Seng, is commissioned by Singapore Power and was officially unveiled by Minister for Information and the Arts and Second Minister for Trade and Industry, Mr George Yeo at the official Kallang Gasworks on the 23rd March 1998 nearby the river. It incorporates the materials from the old Kallang Gasworks and symbioses the years of pioneers of Singapore who worked hard in the past to establish for better life for future generations. 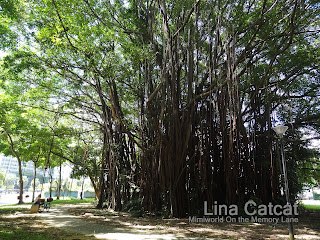 Banyan Tree
There's an interesting tree - a Banyan Tree is located nearby the structure of the Gas Holder. According to the old residents, there used to be the site of shophouses and Sims Drive market & food centre. A small shrine locates at the Banyan tree is an "Earth God" and forlorn "öld" gate is hidden overgrowned by the roots of the Banyan tree. 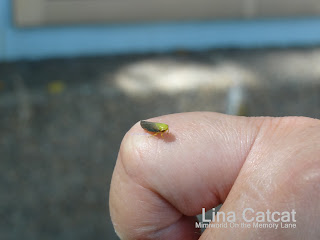 Leafhopper
And last but not least, I saw a adult nymph perched on my hubby's finger - Brownish-green leafhopper. What's its name? Pesky leafhoppers are tiny insects with insatiable appetite and  can damage on plants in the garden is remarkably similar to that of spider mites. If you're lucky enough to spot it.
Posted by Catcat at 22:30