The Downtown Line Phase 2 has 12 'newly' MRT stations will be opened for train services by end of December 2015 that is on 27th December 15. Only seven of the stations are designed as MRT CD Shelters namely Bukit Panjang, Cashew, Hillview, Beauty World, King Albert Park, Sixth Avenue and Tan Kah Kee. Oh yes, Heard that the Tamil translation for Tan Kah Kee station was incorrect, spotted by twitter user and it would amend before the start of official opening after LTA had apologised for the error.
Downtown Line (DTL) opens to the public with SCDF's Shelter Open house on both days (Saturday 12th and Sunday 13th Dec) on weekend only at selected three newly MRT stations - Bukit Panjang, Beauty World and Tan Kah Kee ahead of the line's official opening on 27th December 2015. The Land Transport Authority is offering free travel on the entire Downtown Line, including its phase one stations for six days from Dec 27, 2015 to Jan 1, 2016.
Now, there are 40 underground MRT stations including 7 newly MRT stations (DTL2) designated as public shelters across all five MRT lines. These stations contain thick boundary walls, hardened floors and roof slabs, and are equipped with power, ventilation and water systems. They can hold up to 7,500 people or more including children and babies in times of national emergency. 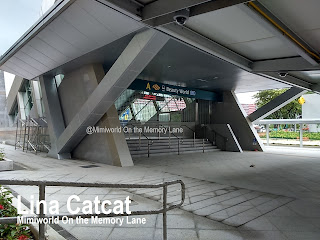 DT5 Beauty World
There are members of SCDF from Shelter Battalion and volunteers will be present to the public and demonstrate on how the emergency works, should there any mishaps or crisis arises. There are 3 main areas of exhibits that is: CD Shelter, community-related, and fire safety-related exhibits.
The CD Shelter Exhibits: The exhibits show the key demonstrations for the protection of the shelterers such as entrance blast doors, decontamination facilities, dry toilet system including water distribution points and shelter management areas. Furthermore there is also an audio-visual presentation on the key features of the shelter provision will be played. 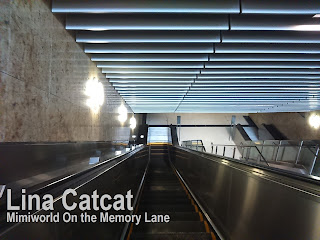 Steep Long Escalator
On the day of 12th Dec, I went to one of the selected Mrt stations - that is Beauty World is not far from my place, it took me about 20 to 25 mins to reach the destination. So I took direct bus to the exact bus-stop opposite Bukit Timah Shopping Centre where the 'newly' Beauty World Mrt is located. Upon reaching the MRT, the long escalator is very steep down close to roof slabs above that built underground level to where the CD (Civil Defence) Shelter is located, much like the bomb shelter.
Once inside the heavy boundary blast door, a member of SCDF staff gives briefing and a visual-presentation shown on LED screen played.
Oh yes, the Blast Door for as long as I could remember. Only the tunnel management platoon is responsible for the management and operation of blast doors at the platform level or underground level.  They seal the tunnel doors to prevent any chemical agents and bomb attackers from entering the station. 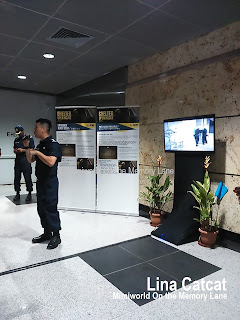 Briefing on CD Shelters Station
The reinforced steel blast doors, decontamination chambers in times of chemical attacks and the dry toilet system... I wonder what about the oil that spills on the ground, will flow into the bottom of the shelter by international attackers and terrorists' chances to light a fire to the oil liquid that spill on the ground if the the blast doors or thick boundary doors are closed or locked during the chemical attacks or terrorists. Oil liquid will create harmful chemical effect to the public, inhale thick smoke and air will dim due to lack of oxygen or ventilation pump is low when there are chaos among the public if not supervised by staffs who himself or herself busy handing the emergency and the lack of manpower. In times of crisis on the outside where the public are still running on the roads to look for bomb shelters when the Mrt stations blast doors or heavy boundary doors are closed to prevent more people to enter.

There is also CPR demonstration for the public to focus on situation of the effected person/s with chemical attacks. For e.g. If a person breathes large amounts of this chemical, move the exposed person to fresh air at once. If breathing has stopped, perform artificial respiration. Keep the affected person warm and at rest. Get medical attention as soon as possible. I took a First Aids course on CPR and others, course fully paid by my company years ago for the industrial accidents and chemical-related at my workplace. 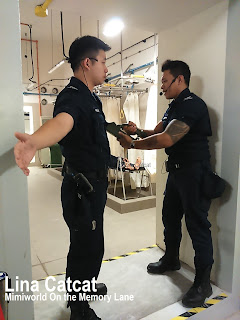 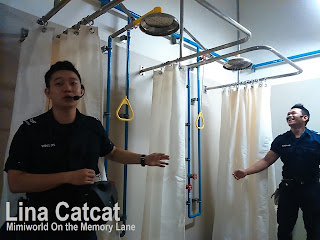 SCDF personnel demonstrating on shower
SCDF staff or personnel demonstrating the decontamination shower to the public.There are some kinds of chemical accidents or attacks may cause you to come in contact with dangerous chemicals. If coming in contact with a dangerous chemical may make it necessary for you to remove and dispose of your clothing right away and then wash yourself. Removing your clothing and washing your body will reduce or remove the chemical so that it is no longer a hazard. This process is called decontamination. 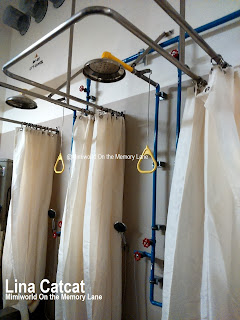 Showering to remove contaminants
Shelterees have to remove their clothing, showering thoroughly to remove contaminants before dressing. Flushing the water by pulling a string handler (yellow) for showering, the 'normal' water is just like when you are showering at home. Do they need a soap to wash it just in case the chemical contacts the skin?
Furthermore, the clothing of Shelterees should be double-bagged and disposed of as hazardous chemical waste and wear clean clothing or gowns if provided by hospital or SCDF in time of need. I presume.
After that, Shelterees to undergo air flushing before they are allowed to enter the main shelter areas. 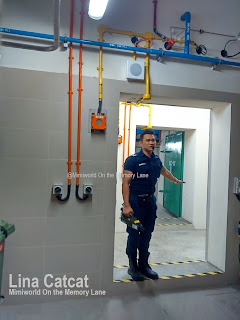 To the Main Shelter area 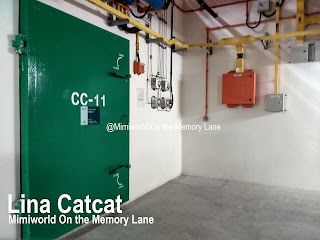 Shelter area
The main shelter area you can say 'a cleaner environment' where the non-contaminated shelterees are sheltered. 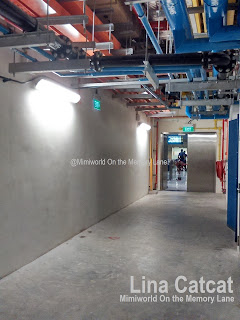 Door exit
After this presentation of the decontamination chamber, next step is - Dry toilet system is where the effected some of the shelterees who has diabetes or others in time of urgency looking for toilet often as if their wasting time is long.
The shelter area management platoon manages the shelterees’ stay at the concourse and platform level as well as deep underground level. These include setting up and managing the shelter areas, water distribution and dry toilet system, setting up ventilation ducts to trains, provision of information, guidance and basic first aid to shelterees. 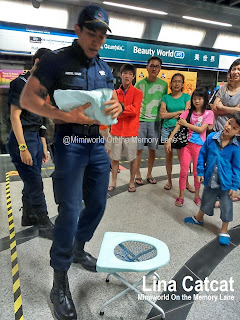 SCDF staff demonstrates on dry toilet system
Black & Yellow stripe adhesive tapes (pic foreground)
The shelter management area will be demarcated by black and yellow stripe adhesive tapes on the floor (shown above) to where the SCDF staff demonstrates on dry toilet system. The average size of shelter management area is about 8m x 8m and can accommodate about 160 shelterees each. Well, does the toilet chair withhold the human's weight if there's an overweight person among shelterees? 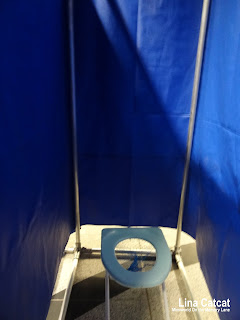 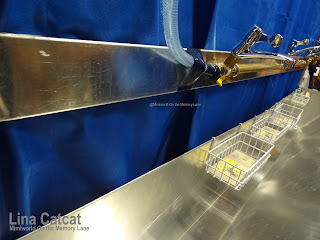 Water tap
The staff in charge quickly assembled a dry toilet system, taking mere minutes to set up 24 cubicles; while at the platform, air ducts were set up to direct ventilation within the trains. 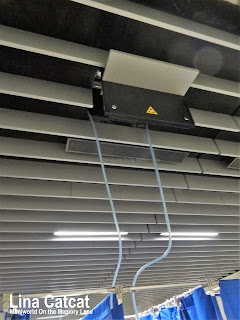 If you are standing outside the train carriage, this is the Shelter Management area which is demarcated within the MRT shelter. This shelter is for the shelterees to occupy and to seek protection when they enter the shelter upon hearing the sound of 'Alarm' signal from the Public Warming system. 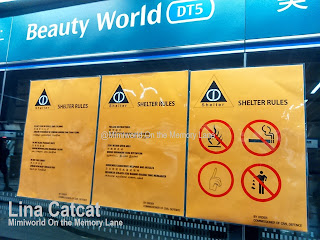 Shelter Rules@Shelter Management area
The shelterees are to follow the shelter rules during shelter occupation: Stay within the allocated area, Be Calm, Do not smoke, Do not litter and listen to instructions given by the Civil Defence (CD) NSmen.
In time of emergency, trains that are stationed in the MRT shelter will be used by the commuters and other shelterees for staying during shelter occupation. 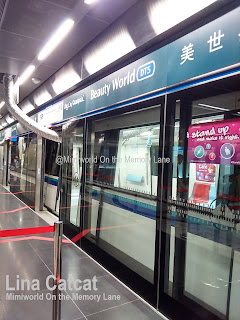 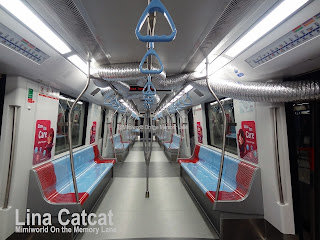 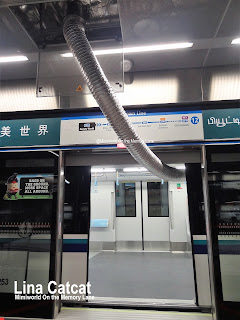 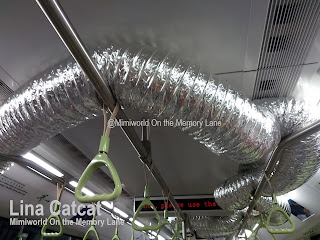 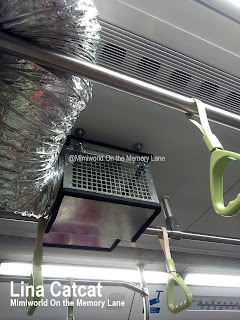 Ventilation box
Unlike the bombing civilian buildings, a deep penetrator can go 30 metres below ground, but it sure can do less when they have a shopping centre above the MRT CD shelter aka bomb shelter of the deep underground level. My HDB block has Bomb shelter just below the void deck and some HDB blocks are at the basement level. 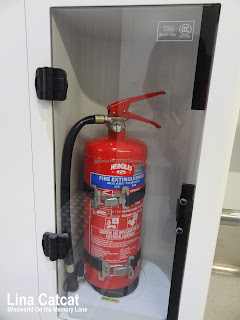 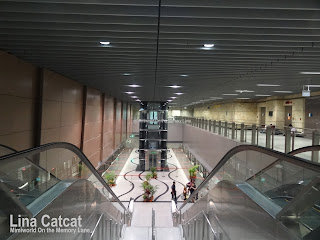 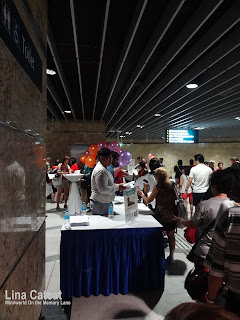 Free Goodies bag counter
After the end of the demonstrations and procedures, the "attendance" public will be given a free goodies bag and a SCDF's Limited Edition card holder.
Posted by Catcat at 16:48