﻿﻿A memory keeps alive when you walk down on memory lanes along the rows of atap houses in Bukit Ho Swee estates where no one knows there are the 'scars' of fire incidents at Bukit Ho Swee in 1961 where the new buildings/HDBs were developed in the years along the fire sites where the 'BIG' fire explosion in the dead afternoon at 3.20pm on 25th May 1961.

﻿A friend of mine, James Seah (blogtoexpress) who was giving a speech about his personal experience on Bukit Ho Swee Fire at Woodlands Regional Library on 9th Dec 2012 at 2.00pm.
His telltales experience of how his mother and himself escaped from the fire thru the times of crisis. James Seah's blog Personal Encounter.
During the talks, there is also an exhibition on the 3rd level which is on displayed till 28th Dec 2012.
I recall from my hubby who told me about the Bukit Ho Swee fire near his home of Blk 22 Havelock Road where the ferocious fire broke out along the streets.
﻿﻿There was also a 'huge' fire at Robinson Department store at Raffles Place where my mother-in-law worked at Robinson restaurant for many years till the fate of 1972 when the fire broke out in the morning. There was a chaos at the Dept store where many people came running out of the building. Her boss (Robinson Restaurant) whose wife (Chief Cook) Mdm Yuen trapped in the lift with 7 other victims and died. My hubby recalled of his mother came running home in the morning and shouted 'Fire' at Robinson Department store where she worked and told of her experience encounter at the Robinson Department store of her colleagues who perished in the fire.
A lesson is learned when the inexperienced firemen were not trained enough in time of fire since 1961.
﻿﻿﻿ ﻿﻿﻿﻿﻿
﻿﻿﻿﻿﻿﻿﻿﻿ ﻿
﻿﻿﻿﻿﻿﻿﻿﻿﻿﻿ ﻿

The scene of the ferocious fire as below: Courtesy of the National Archives of Singapore 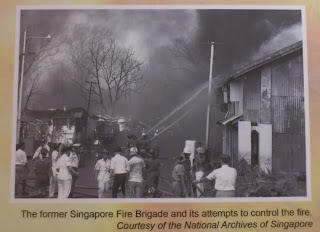 I would like to thank James Seah on his speech on his personal experience at Woodlands Regional Library﻿ and posted his blog to give fire awareness of the 'Bad master' instead of 'Good servant'. 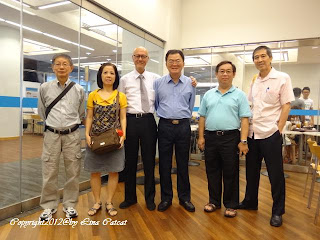 Third from left James Seah and his friends
Posted by Catcat at 12:10